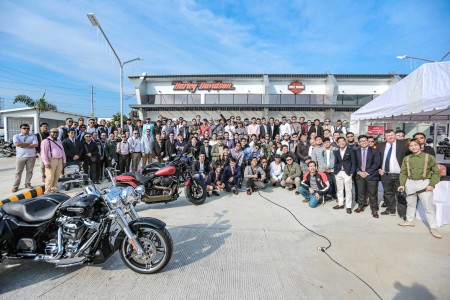 It was the day when retro riders from different parts of the world unite and suit up for the Distinguished Gentleman's Ride (DGR). It was the first time that Pampanga joined in this ride for a cause as it was for me as a participant of this noble event.

At the crack of dawn, classic and vintage style riders from different provinces in Central Luzon gather in front of the newly-opened Harley Davidson Pampanga at the Laus Group Motorcycle Hub in City of San Fernando. Each rider sporting their gentleman clothes wearing formal suits ignoring the tropical weather of the Orient.

More than 200 dashing participants joined the ride to support the DGR which was founded in Australia. This ride-for-a-purpose focuses on men's welfare particularly on prostate health.

From 64 cities in Australia when it started in 2012, this event had gone global to more than 100 countries and around 650 cities participating around the world.

In the Philippines, seven rides have been identified including Cagayan De Oro, Cebu, Davao City, Manila, Pampanga, San Pablo City, and Zamboanga City. My felicitations to the organizers, Marc Liwanag, Jun Cruz, Patrick Sibug and company, the Harley Davidson Pampanga team, and the Laus Group for hosting this successful event.

I need to mention the friendly traffic enforcers of City of San Fernando who guided us from San Fernando to Angeles City. As soon as we arrived to my home city, my kabalens and I took over as guide including lawyer Bryan Nepomuceno, Jun Cruz and John Montances.

The first ever northern leg of the DGR Philippines was indeed a blast for us classic style riders. The visit at the historic sites in the province including Pampanga Capitol, the Old Train station in San Fernando, the Salakot landmark in Bayanihan Park, and the Veterans Memorial inside Clark had justified our vintage tweed clothes for the day.

It was a memorable ride for us vintage riders. And it felt good because it was done for a cause. I hope next year will be bigger.

Kuya J Pelayo IV is the president of Metro Angeles City Journalists Association, Inc. and the president of Pampanga-Tarlac Energy Press Corps. For comments and suggestions, e-mail me at 4th.pelayo@gmail.com